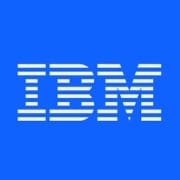 The International Business Machines Corporation, or frequently known as IBM, is one of the world’s leading IT companies. Charles Ranlett Flint founded it over a century ago.

Their logo and services are known for their spotless services in IT computer consulting services, software, and hardware.

The IBM logo has three main design elements that work well with one another. They currently have two versions of logos in use.

The IBM logo that we are familiar with has been in place since 1972. It has the letters I, B, M, written in capital letters.

The logo has a linear approach. The letters are equally spaced next to each other, and they have eight equal stripes running across it.

The previous thirteen striped logo was difficult to reproduce. The photocopiers back then could not reproduce it properly. They hired Paul Rand to solve this problem.

Blue is often associated with stability, depth, loyalty, trust, and intelligence.  The light blue color has a soothing effect on people. In the IBM logo, they convey a sense of strength, professionalism, and dominance. It is a highly effective logo that is symbolic of their professionalism.

Along with the blue and white striped version, they also have a strict grey and white version of the logo in use. They launched this 2nd version in 2018 and it still remains in use.

In the 2nd logo, IBM has opted for a bold styled shape.

The bold visual reflects the stability and responsibility that IBM provides to its customers.

The company’s font is very simple yet unforgettable. Both the logos in use have the same font, serif. It has a custom typeface print. The logo is extremely simple, yet bold, and stylish.

The letters I, B, M, are in simple, bold letters, with the top ends and bottom ends of the ‘M’ slightly extended.

The logo is workable and versatile.

The IBM logo has changed very little after their partition with the globe IBM. The logo changed from the 13-stripe version to the current 8-stripe version. The minimum changes in the logo to the current version confirms that they were very close to developing the perfect emblem in 1956.

The IMB’s slogan is simply, THINK. Their highly successful ‘ThinkPad’ series is named after it.

The debut emblem is a monogram with the company’s previous name’s capital letters- the International Time Recording Company.

After the company renamed itself to the Computing Scale Company, they introduced a complex logo.

Reason– Since the company changed its name, it decided to come up with a separate logo representing its name Computing Scale Company (CSCo)

During the company’s acquisition, they underwent a major rebranding. They changed their name to Computer Tabulating Recording Company.

Reason– Since they went through a major rebranding, the company wanted to make a bold stance by recreating their logo with the new letters- CTRCo.

The company again changed its name to International Business Machines. They did not use an abbreviation; instead, the developers took the full name and typed the words to represent a globe.

Reason– They shaped the logo like a globe since they wanted to expand their business worldwide. They changed the previous ornate logo to a simpler and modern font.

It was a time of fundamental change in the logo. They approached simplicity and used the abbreviation of the International Business Machines, IMB.

Reason– The company went through a time of change and wanted to simplify their logo further than the previous version.

Reason– Complicated logos were simplified to make it easier to understand, depicting their user-friendliness.

Reason– There were no other prominent companies that use an entire stripe-based logo. It made them stand out. The linear approach to their logo conveys their speedy services.

Hence, the currently used version has a long and exciting history behind it. With years of evolution, the IMB logo has become one of the most successful among IT companies worldwide.