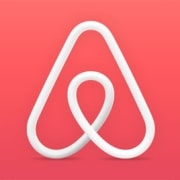 Airbnb is an American holiday online rental marketplace based in San Francisco, California, and The United States.

The business was founded by Brian Chesky, Nathan Blecharczyk, and Joe Gebbia in 2008.

The new Airbnb logo has undoubtedly played a role in its success and was developed by a London-based design agency called belong together.

The Airbnb visual identity doesn’t have many variants created throughout its history, as there has been only one redesign until today.

The designers created this version of the ” Airbnb” logo in 2014. The logo might seem simple at initial sight, but it has hidden meanings in its abstract and lightweight design, placed on the left from the lower case wordmark.

In 2014, Airbnb did not simply update the logo but gave it a new identity with the slogan “belong anywhere.”This new logo is a combination of four different icons, people, places, love, and Airbnb. Together they make a shape that is both simplistic and unique.

The word ” Airbnb” is written in lowercase without any visual splits in the name.

The color selection for the new logo for “Airbnb” was completely different from the original logo colour.

The font used for the logo is presumably Bello script. Bello is an award-winning brush typeface with a lot of ligatures and washes.

The Airbnb company redesigned their logo to support its growth. The continued growth and success enabled the Airbnb company to project a new image and fulfil that global potential by creating a new and more engaging logo.
• One unknown fact about the logo is related to the Founder Brian Chesky and his roommates. Both the roommates rented out air mattresses because of impending rent, and the use of “air” in the title is a tribute to the company’s roots.

Airbnb’s identity and logo have evolved a lot over time, and with it, the focus is on its community of guests and hosts.

The new “live there” tagline, launched with the first campaign in January 2016, is the natural evolution of the message that air b and b has been working to deliver to a broader audience.

This slogan started in 2007 as a strictly functional logo representing an affordable alternative to hotels.
• The logo read out “AirBed & Breakfast”, with a “Forget hotels” below it.
• The word airbed had the letters ‘A’ and ‘B’ in uppercase.
• The word “breakfast” had the letter ‘B’ in uppercase.
• The words “Airbeds” and “Breakfast” what joints together using the ampersand.
• The front part, “AirBed &” was in the colour blue, the following part was in the colour pink, and the slogan was in grey.
• The logo had a white border around the characters, and the slogan was mentioned below on the right corner.

Reason: This logo was redesigned because the company decided to go by the name “Airbnb” instead of “Airbeds & Breakfast”. The colour selected for the new logo also represented trust, stability, and intelligence and therefore was perfect for a logo of a startup rental homes and Hotel Company.

The company designed the Airbnb original logo in 2008, which was not the first version, as a company started with another name and used it for a couple of years before rebranding.

With the slogan ” travel like a human”, the brand message started to include more emphasis on the community aspect, highlighting the human contact as the centre of Airbnb experience.
The original logo has its own minimalistic and straightforward essence. The first Airbnb version off the logo featured of white and blue cursive inscription. Brian Chesky played a significant role in developing the logo but soon decided to change it completely.

Reason: This logo was redesigned because Airbnb wanted to connect with their customers, and the new logo icon was a combination of four other icons.
Therefore, it is noticeable that the “Airbnb” logo played an essential role in the company’s impact. With this massive development in the Logo category, Airbnb continues to strive and grow.