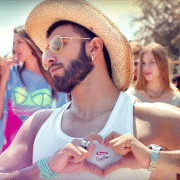 If you live in India, no matter where you live ‘Rupa’ is a brand recognized by everyone and is a household name.
Rupa Frontline revamped their brand identity when they launched their new logo recently. Their new Logo is all set to attract the millennial generation. The logo is totally different from the old – is aimed to reposition the Brand as a young and fashion-forward brand with the aim to impart comfort to the consumers.

Their new Logo is all set to attract the millennial generation. The logo is totally different from the old – is aimed to reposition the Brand as a young and fashion-forward brand with the aim to impart comfort to the consumers. ‘Rupa and Company Limited’ established in 1968 as Binod Hosiery, is certainly one of the biggest knitwear brands who manufacture and market innerwear for all men, women, and kids category.
It has its name in the ‘Limca Book of Records’ for being the biggest manufacturer of casual wear and inner wear for 11 years in a row in India. Other prominent awards won by Rupa and Company Limited are Worldwide achievers Business Leadership Award for the year 2013-14 and Time Research Business Leadership Awards for Branch Excellence in Innerwear for the year 2013 to name a few. The Economic Times of India selected Rupa as the Best Corporate Brand for the year 2016.
Founders:

The founders of Rupa are brothers Prahlad Rai Agarwala 74, and younger brother Kunj Bihari Agarwala 64. Both are known as PR and KB. On asking, KB replied: “What is business? It is a mere adjustment. You have to improvise and see how best your goods sell.” 19 year sold PR started the company in 1962 as a Binod Hosiery and later changed it to Rupa n 1962. There were times when PR was refused to sit in the prospective shops where they wanted to sell their products in competition with Dora. It was only on after Dora went into retail in 1965 that Rupa got the much-awaited break and turned in a 1 Crore company in 5 years time.

Bollywood (Indian Hindi Film Industry) used as their marketing tool was the biggest breakthrough in 1980’s when Rupa went national through its advertising. They advertised in movie cassettes in which Bollywood movies were pre-recorded. This change made the demand for the brand rise instantly. Their tagline ‘yeh aaram ka mamla hai’ (it’s a matter of comfort) became a line every person in India knew by heart. Do you know Rupa spends 8 percent of their total sales revenue on the most important area – Advertising.
Five members of the younger generation have joined the Brand where one of them said: “We have to ensure that the pie keeps growing.”
With the growing needs of social media and online sales, Rupa realized the need of the hour and revamped their brand identity.

What does the New Rupa Logo stand for?

The new Rupa Frontline Logo stands for ‘being ahead.’ There is an additional slant in the letters of ‘frontline’ that depict progress and forward movement. An emphasis on the letter ‘E’ is prominent and has the Aerial view of a Phalanx. The three stripes in the letter ‘E’ bending forward signify the fact that the Brand Rupa is already moving ahead.

Talking of three stripes – will surely remind you of the world renowned brand Adidas. Check out its very memorable logo below: Rupa’s smart move makes the consumers of the fast growing social media and online shopping world in sync with the brand.

The logo earlier – if you haven’t already noticed has a hand written style to writing the Frontline – where the entire word was slanting upwards almost 45 degrees on the right-hand side. The old logo had the similarity of a signature.

The new Logo of Rupa is designed with the idea of positioning it with the expansion plan both in India and abroad.

On the launch of their new Logo, there was a lot of excitement and the Brand President Mr. Mukesh Agarwal even said: “I’m much excited to launch the new logo for Rupa Frontline. We’ve been working on the new logo for quite some time, as the brand has come a long way since its inception in 1985 and a new logo that represents the brand’s present outlook was absolutely necessary.

Two decades ago, Frontline was introduced as men’s innerwear brand. However, gradually it evolved into a lifestyle brand catering to the various needs of the consumers with superlative products known for its quality and price. The revamped logo efficiently projects the brand’s forward movement, while still retaining its authenticity and heritage.”

Rupa Frontline’s logo brand value remains the same even if the logo is changed. The brand will continue to be known for “its commitment to provide quality products and competitive pricing with a major focus on research and development, technological up gradation and exceptional customer service.”

Rupa plans to introduce the brand to their consumers through the large medium of TV, outdoor, print and digital.

They have appointed upcoming Bollywood Movies Star Ranveer Singh known for his high energy and stylish avatar as a brand Ambassador for Rupa.

About the Brand Rupa:

Rupa has a record of being the first innerwear company in India to have taken a Bollywood Movie star to endorse their brand over the years.

Rupa is not the only Brand the company has.Frontline is the flagship brand yet Rupa family has many more brands like Softline, Euro, Bumchums, Torrido, Termocot, Macroman, Footline and Jon. They have products like Kidz, Sky, Air, Rib, Interlock, XinG and Expando – created so that the customers are able to differentiate one product type from another.

The new Rupa Frontline Brand Logo depicts how the brand has grown from an innerwear brand to being one of India’s most popular Brands. The logo is symbolic of its aspirations and belief system. The new design is a statement in itself making Rupa Frontline as one of the Gen-Next Leading brands both nationally and internationally. Rupa has explored various celebrities over the years to endorse its brands. The stars associated with the brand are Sanjay Dutt, Govinda, Ronit Roy, Aishwarya Rai Bachchan in the Innerwear and Casual swear Segment.

The most recent entry early this year has been made by Ranveer Singh, Bipasha Basu and Sidharth Malhotra for their Frontline Brand, Euro fashion Inners, and Softline. Celebrity Endorsements and their effect on Brand Building:

Over the past 20 years increasingly the celebrities have started endorsing brands.

There are probabilities of the customer’s likeability to increase by the use of the brand by a celebrity. There are millions of Rupees spent on celebrity endorsement all over the world. Celebrities like Amitabh Bachchan, Sachin Tendulkar and Shahrukh Khan being the top celebrities in India sought to endorse brands.

The advertising industry keeps a close check on the kind of impact a celebrity can make for a brand.

Celebrities can reach the depth of consumer segment:

Celebrities increase the consumer reach to the segments of the consumers who may not even notice the brand.

Reach: In branding terms ‘Reach’ is a number of people who have heard/seen the brand’s message at least once.

Brands employ celebrities to endorse their brands for two main reasons. Firstly, to market their product or services and secondly, in an attempt to reach the largest possible consumer assortment – often termed ‘frequency’.

Usefulness of ‘Reach’:
Let us take the example of one of the world’s most popular and most followed Instagram celebrity. Selena Gomez – every post she puts up on her Instagram page is viewed by 69.5 million of her followers. Taylor Swift has a whopping 69.3 million followers with Kim Kardashian with 63.7 million Instagram Followers.

If any of these celebrities endorse a brand and post a picture with the company’s logo and brand mission with a message for their followers to go and try out the product – think of the enormity of its
response.

It has become one of the most effective ways to boost sales and to achieve brand identity.

Celebrity endorsement can make or break a Brand Image

Advertisers and retailers have a huge responsibility in choosing the right celebrity for their brand. The celebrity should be reliable and trustworthy to endorse or sponsor a product. A balance between the celebrities public image and the company’s brand image have to be maintained.

Shahrukh Khan is currently one of the most sought after celebrity by brands across Asia. Here is a scene from his recent TV ad where he is the face for Dubai Tourism. Check out the still from the ad: In the TV Ad – Shah Rukh Khan is featuring in a film #BeMyGuest film by Dubai Corporation for Tourism and Commerce Marketing (DCTCM) inviting people to be his guest at Dubai the city known for its Sand, Sun, and Adventure.

The film shows Shah Rukh has a home away from home where he invited people to Dubai by saying “come with me, be my guest.”

The three main advantages of a Brand endorsement by a Celebrity are:

It builds Brand Equity. Who can ever forget the Michael Jordon and Nike association that increased the sales to make Nike a billion dollar company?

High Recall Value – Since it is easy to remember the brand because a celebrity endorsed it – it brings more and more customers to come and buy the services or products.

A brand may not have an identity until a celebrity endorses it. Celebrity helps a brand stand out in a crowd.

What is Brand Identity – A case study
Scroll to top