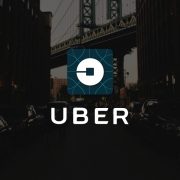 Your favorite cab service recently changed their logo from a stylish U-shaped to an atom and bits logo. Besides the controversy that encircled Uber New Logo, the founders have confidently mentioned that the updated identity of Uber logo has given a consistency to the design but the major question lies if the new look of Uber is potential enough to generate the same hype for the brand as the previous one.

The square in the Uber New Logo is used to define a bit, which is the fundamental element of data in the computer as mentioned by Uber.

This symbol for the brand was basically identified as the perfect symbol for Uber because it connected their service of movement of people, goods, food etc.

Kalanick, the man behind Uber himself has put a lot of effort for this new design. Although being an engineer and entrepreneur by profession, Kalanick has worked whole -heartedly to produce a design that could define the overall brand perfectly.

Flourishing its business successfully in more than 400 cities across 65 countries, Uber vision behind the new identity is much more than a marketing tool.

The so-called X factor seems to be lacking the new logo. Whatever might be the aim behind such logo design, it is definitely going to take time for the viewers to adjust with this new identity of Uber.

The new symbol fails to stand distinct in the crowd representing the brand.

In order to reflect the flexible nature of the company, it has used tailored colors and fonts that it takes the brand to an altogether different level other than just a transportation service.

A major focus has been given on the font selection. The previous logo had a glimpse of luxury in it. But the logo was replaced by a much bold and name focusing font.

Despite using a strong effect, the designers have failed to pay heed to the inner clarity of the bottom text of alphabets B, E, and R. The upper half of the letters are written with clear cut sharp edges. However, the bottom half of the alphabets appear elliptical.