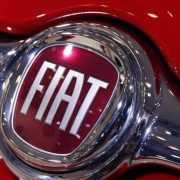 FIAT today stands as one of the strongly established car manufacturing companies and also the seventh largest automobile maker in the world. FIAT Logo History stands erect since 1899 when this organization was established as Fabbrica Italiana di Automobili Torino(FIAT) by Giovanni Agnelli and other investors

The very first logo was designed with a golden brown background with the company named inscribed on it. With the passage of time, in the early 90’s, FIAT started becoming prominent and reach a number of producing 24 cars per year.

FIAT logo has evolved as their cars. With advancement in the designing and development of cars, the identity of the brand kept on improving.

Around 1901, it came up with a proper logo with its brand name on a blue background. 1904, received a modification with the emblem being changed from a much rectangular shape to an eclipse one. This logo of FIAT remained for a longer time from 1904- 1921 when the next alteration was done. The identity has been repeatedly enhancing its shape from a rectangle, to eclipse and then next was a circle.

However, this modified  as a complete change of color.The silver text changed to red and blue background was updated to a silver color. In 1925, the identity experienced an another color modification.

By 1931,FIAT started becoming known as one of the most popular brand in the production of cars with latest and fascinating  cars and saw the changing in the badge which turned to a rectangular shape from a circle. The next year 1932, it again modified the logo which looked similar to the shield. This logo became stable from 1932-1968. During the end of 1960’s  FIAT earned great success and brought various FIAT brands including Ferrari.

In 1968, the badge was completely changed and was reduced a four letter word saying FIAT. In 2001 a minor adjustment in the identity was done.

In 2006, a glossy emblem representing FIAT in a combination of circle and trapezium was introduced, symbolizing the “continuous changes.” Best Logo Colors for your Brand
Scroll to top wpDiscuz